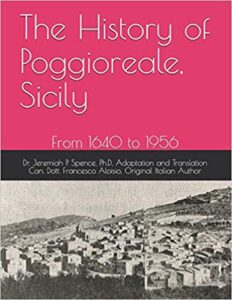 This book is part of a series of books published documenting the history of the village of Poggioreale in Sicily, Italy.

Poggioreale is a small village some 40 miles southwest of Palermo in a region known as the Belice Valley, which is within the province of Trapani. In the late medieval period the area belonged to the Barony of Favarella that controlled by the noble Morso family on behalf of the Sicilian King since 1524. On 16 May 1643 Gaspare of Morso was named the Prince of Poggioreale and later in 1650 Peter of Morso was named the Prince of Poggioreale, among other noble titles. Decades later a small village was constructed that at its peak was home to almost 3000 people. In 1968 a severe earthquake struck the Belice Valley and destroyed the village Gibellina, and severely damaged many surrounding villages, including Poggioreale.

Although only 30% of the buildings were destroyed, the town fathers decided it was unsafe to continue living there. So, the entire town lived in temporary barracks in a field until a new village could be constructed some seven years later. During this time many residents sent to live in Sydney, Australia where there was an existing Poggioreale community. Today, the old town or Poggioreale Vecchia is tourist attraction and the new Poggioreale is about half a mile downhill.

I have been researching these families since the mid-1990s long before the introduction of Ancestry.com. In the summer of 2018, I had the opportunity to spend time in the village of Poggioreale with the objective to gather as much historical information as possible.

The translation of any scholarly work is a complicated and time consuming endeavor. This work poses additional challenges as Father Aloisio liberally includes passages in Latin, Sicilian, and the Poggiorealesi dialect, in addition to the main body of the text being in Italian. Where possible these elements have been translated into English; however, not every bit of Sicilian will be translated. Given availability of resources this may be undertaken in the future and will be highlighted in a future edition of this book.

A project of this size includes the efforts of many people, not all of whom can be named, but these should be remembered: Marilyn Maniscalco Henley, Christine Tina Tondola Anderson; Rosario Sanfilippo; the Inter-library Loan Office at the Perry–Castañeda Library at the University of Texas at Austin; and the Italian Cultural & Community Center.

A special thanks must be given to the Superiore Provinciale, P. Salvatore Fiumano, sdP, of the Provincia “Madre della Misericordia,” at the Missionari Servi dei Poveri religious community in Palermo, Sicily, Italy who generously provided permission to translate and publish the book in English.

Support open genealogy research. Funds from the sale of these books go to fund ongoing research in our community. Promote the book to you relatives. As a matter of practice I donate copies of all of my books to major genealogical libraries, including the Texas State Library, the Clayton Library in Houston, and the Bryan Public Library, as well as, copies of all books are donated to the Comune of Poggioreale in Sicily.

Finally, a note of clarification, this 5th edition is not a direct translation of the work of Father Aloisio, rather it is an adaptation and translation. When I translated the entire book to English, I found it difficult to read and even more difficult to navigate. So, I broke the text down into small content blocks and re-assembled them into navigable chapters. I have eliminated a number of items, mostly long passages in Sicilian, that were more disorienting than informative. Additionally, I expanded the saint chapters, as many descendants of the village no longer actively practice Catholicism and would not understand the cultural significance of the individual saints.

If you identify a major error or omission, feel free to contact me and I will attempt to correct the issue, where possible: [email protected]